Stephen Hawking stated all but absolutely that the creation of the universe from “nothing” can be attributed to M-Theory and “gravity.” Hawking stated a God may exist but there is no need for him. Hawking was very direct and concise.  “God was not necessary.” 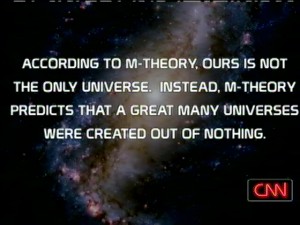 “The Grand Design” really boils down to this statement: “According to M-theory, ours is not the only universe. Instead, M-theory predicts that a great many universes were created out of nothing. Their creation does not require the intervention of some supernatural being or god. Rather, these multiple universes arise naturally from physical law.”

Permanent link to this article: http://jefferytv.com/hawking-states-m-theory-gravity-explain-universes-origin/