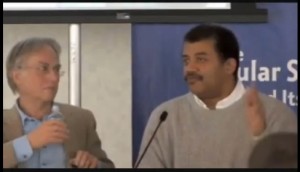 From: 28 September 2010 12:01 AM
To: 28 September 2010 11:59 PM
Time Zone: Eastern Time (US & Canada)
Description: The Poetry of Science, Discussions of the beauty of science. Two of science’s luminaries converse on the beauty of science. Neil deGrasse Tyson, astrophysicist and host of NOVA and evolutionary biologist Richard Dawkins will explore the wonders of the Cosmos and of Life, its origins, its inspirations, and why science is not just an option, it is the only reality we possess.

What: The Poetry of Science
When: September 28th, 2010
Where: Crampton Hall Howard University
Time: 12:00pm – 1:30pm
Other: Ticketed event, free to the public.
For further information visit http://www.howard.edu/howardlife/cramton/

Richard will be speaking at this event.
This event is sponsored by the Richard Dawkins Foundation for Reason and Science.
Location: 2400 Sixth Street, NW, Washington, DC 20059, United States

Tickets: $10 Skeptics Society members/Caltech/JPL community; $15 everyone else. Tickets may be purchased in advance beginning Sept. 7, 2010 through the Caltech ticket office at 626-395-4652 or at the door. Ordering tickets ahead of time is strongly recommended. The Caltech ticket office asks that you do not leave a message. Instead call between 12:00 and 5:00 Monday through Friday.

RICHARD DAWKINS BEGINS BY EXPLAINING that all of his previous books naïvely assumed the fact of evolution, which meant that he never got around to laying out the evidence that evolution is true. Dawkins also came to realize that a disturbingly large percentage of the American and British public didn’t share his enthusiasm for evolution. In fact, they actively abhorred the idea, since it seemed to contradict the Bible and diminish the role of God. So Dawkins decided to write a book for these history-deniers, in which he would dispassionately demonstrate the truth of evolution beyond sane, informed, intelligent doubt. If Charles Darwin walked into a 21st-century bookstore and wanted to know how his theory had fared, this is the book he should pick up. As Darwin famously noted, “There is grandeur in this view of life.” What Dawkins demonstrates is that this view of life isn’t just grand: it’s also undeniably true.

Permanent link to this article: https://jefferytv.com/richard-dawkins-neil-degrasse-tyson-do-howard-university-dawkins-does-cal-tech/