Return to About Me 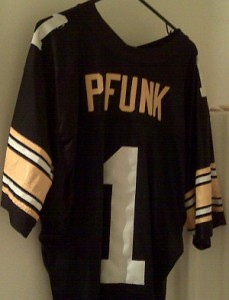 In 1971, the Kansas City Chiefs lost to the Miami Dolphins in what was at that time the longest game in NFL history. Being a huge Chiefs fan and a fan of Otis Taylor, I knew all the Chiefs roster and collected their football cards. But I guess being that young a loss like that to the Dolphins which I watched every second of on TV was too heartbreaking.

Looking back I still wondered how I so easily abandoned the Chiefs, but that next year the Chiefs were out and I needed a new team. I remember my Father saying that the Steelers may be a good team in 1972. It just so happened that the Pittsburgh Steelers were on TV every week in Youngstown so I was able to follow them closely.

After about the 3rd game of the season I was well on my way to becoming a Steeler fan. We went 11-3-0 that season and made the playoffs. And it was the playoff game against the Oakland Raiders that made me a fan forever. There was just a few seconds left in the game and it looked like the Steelers were going to loose. My father got up to go to the kitchen and said something like “its all over but the shoutin'” and that’s when it happened. Arguably the most amazing play in NFL history “The Immaculate Reception.”

Permanent link to this article: https://jefferytv.com/about-me/my-pittsburgh-steelers/

About Me Beliefs DAILYS jefferytv.com Me Talkings My Pittsburgh Steelers One Man’s FUNK ENTELECHY and Theory of Universe Television Series’ Watched The Music In My Life Resume: Jeffery S. Mitchell