My Thoughts On The 2013 Grammy Awards 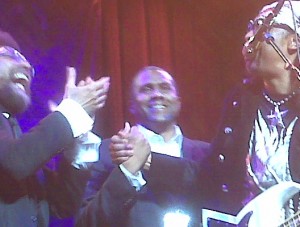 i’ll be there just like I was last year in LA when snoop and dr west got funky wit it and I helped you back on stage after you touched somebody (I remember the first time I saw you do that early 90s hollywood palladium I believe) and then meeting you in your dressing room on my birthday the next day in San Francisco wearing that pittsburgh steeler jersey with that p funk on the back oh yeah mr collins I was born in raised in ohio and came up on Parliament (not Funkadelic, specificly Parliament) and 3 deacades later I hear Lige and Clip and Kidd and Greg Thomas sing about noise and boys before they called the Mothership down. what y’all created is so special its still going strong and I’ve come to realize the specific elements that went into that creation and the creation of FUNK itself. FUNK began with Mothership Connection everything before that was just funky. The part Ohio played in the creation of that genre when Parliament was the first to use FUNk as a noun and bring every instrument down on the one and how so many other groups during that era successfully recreated that feel and hit that spot. 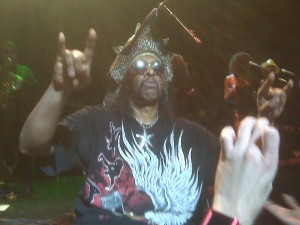 I thought everybody danced and did music the way we did in ohio moving to LA I found what we are is special I can remember my mother taking me to get stitches cause I hit my head on the coffee table doin the popcorn same woman was head of our cub scouts and we did a dance routine to psychadelic shack for a troop meeting and we practiced using her jc penney console stereo she use to let us listen to her 45s one of which was testify amongst many others. 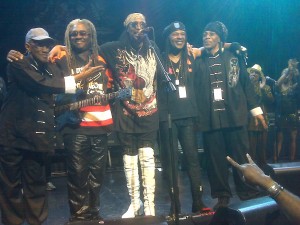 pardon me while I wiggle, I’m under the influence of a groove (don’t tell me to be cool, you can be cool when its your turn)

oh how the music moves me like I was saying when I began to understand exactly went into the creation of Parliament I began to see your role and your contributions and how they lined up with the parts of pfunk that I gravitated to. First time I walked a major city alone philly I bought this boot is made for fonkin I remember it well the feeling to this day. Mothership Connection changed my life. From the very instant I heard that keyboard sound I was hooked. I can remember where I was sitting when I heard it to and can picture the bootleg 8track I borrowed cause there was no way I was leaving that house without that music. I believe you and mr clinton believe that was a real ufo. 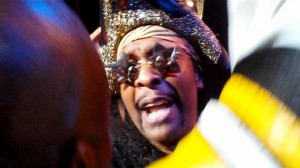 And for all intents and purposes it served its purpose that ufo cause about a month ago stephen colbert called you and gc “interdimensional black people” and showed a pic of y’all. What y’all created to me is way above all others by far. Once I got home with that mothership 8track I typed out all the words and have been studying every syllable off every pfunk album since. The keyboards caught me, but the concept kepted me. Not a contradiction in philosophy across any pfunk album. How is that? There is deep intregrity in this consistency which I demand from anything I place my faith in. Not only is the music pure, but the core philosophy is also. Pfunk freed me to be a fool i still felt cool cause the doctrine was strong enough for a teenage boy to place a faith in it. The boy is 50 now and still living on the one musically and philosophically. So yeah mr collins, I will be there

Permanent link to this article: https://jefferytv.com/my-reply-to-bootsy/