The Music Is But One Of The Delivery Devices 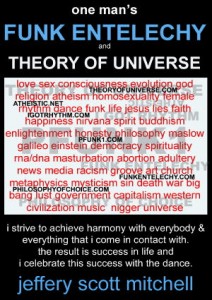 PFUNK1:
one mans FUNK ENTELECHY and THEORY OF UNIVERSE

The search for meaning often eludes us all. Often times it can be a lifelong quest for self-awareness and the nature of reality itself. Where’d it all come from? Where is it all going? How do I fit into the scheme of thangs ,etal.. A whole generation of young mostly black kids were indoctrinated into and turned on to this ‘higher consciousness’ if you will in the late-70s when The Dr./George Clinton stepped off of the Mothership across concert halls all over the world. 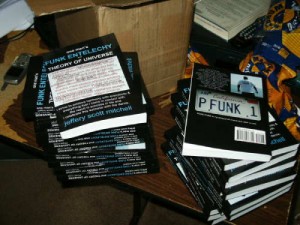 He and the parliafunkadelicmentarian aesthetic literally dogged our minds to unlock the doorways into a magnified look at the world we live in, its universe or universes. It was about creating and celebrating alternate realities, not to destroy the basic structure but to provide an alternative to it. As in ‘when all the smiles are out of sound and there’s no fun around, play with your syndrome’

Emerging from this springboard of P-influenced mind expansion come PFUNK 1’s (aka Jeffery Scott Mitchell) ” One Man’s Funkentelechy & Theory of Universe”. A truly amazing personal collection of anecdotes, observations, musings and conclusions as to the nature of it all. A veritable theory of everything. Check out some of the subject matter: synchronicity, metaphysics, evolution of races, the law of rhythm, atheism, faith, fear, America, and too much to even get into here.

Not unlike the original P-Funk movement, this book will enlighten you and challenge you. I must admit, its hard to put it down, I found myself in agreement at times, other times in extreme disagreement with it precepts, but it’s all good and its all truth, written from his straight-up personal experiences throughout this adventure called life.

This is one man examining himself, his relationships to the world and its inhabitants, his reality and his beliefs about world and universal-view. No lie, it has led to me re-evaluating and re-examining my entire belief structure. It has changed my awareness and perception and actually changed the way I think about everything. It has caused me to question what it means to be truly happy.

I don’t know if that is what Mitchell set out to do, but I challenge anyone to read this truly unique assemblage of words and meaning. Words are power and one look at the words on the cover had me all over it: love, sex, consciousness, evolution, religion, funk, spirituality, racism, groove metaphysics, lust, civilization, music. What is it that gives us total perpetual euphoria? It is a feeling of harmony and peace with everything and everyone. Complete enlightenment. This brief review does it no justice, read it & THINK!! It Ain’t Illegal Yet!!

Permanent link to this article: https://jefferytv.com/one-mans-funk-entelechy-and-theory-of-universe/